I am still planning to write a post on the psychological aspect of the pregnancy hoax at a later time. This post is about what is obvious to me, but may need to be spelled out to the general public.

I continue to be surprised that there are people who believe that Sarah Palin was pregnant with, and gave birth to Trig Palin. I'm not talking about the Palin supporters. I'm sure there are people in that group who realize that this was a faked pregnancy. Their comments are usually along the lines of, "Well, so why does it matter? Maybe she did it to protect a family member." Or, "This shouldn't matter, she gave a Down Syndrome baby a good home." Of course, there are some that just go along with it, they are the ones who are the most venomous of any questions of the pregnancy. I believe it is because they are terrified of it being the truth. Palin has gained a lot of political traction with this tale with the pro-life group.

No, the ones that surprise me are the ones who are anti-Palin, that give credence to this story. They prefer to go with the 'see-what-bad-decision-she-makes-'Wild-Ride'-tale. The Wild Ride story, all by itself, should have most people understanding that she was never pregnant with Trig. That's WITHOUT even seeing the pictures of how impossible it was.

But this post is about the 'pregnancy' pictures and the science that contradicts it.

I have heard many people say when they are trying to explain the pictures, "I know ________ who never got very big with her pregnancy." I know that can happen. I have taken care of two women in the hospital that were post-partum that didn't show much. One was very tall and it was her first pregnancy. The other woman was overweight and tall, also her first pregnancy. So yes, that happens with some pregnancies, but it is rare. I would be rarer still for it to happen with a woman who is less than 5.5 ft and slender, who was supposedly having her seventh pregnancy. Especially one whose first pregnancy looked like this:

But pretend it happened just the way Sarah Palin said it happened. Let's compare another pregnancy of a woman who photographed herself until her eighth month. Ironically, she is also the mother of a Down Syndrome son who was born in 2009. I first found her monthly pregnancy progression on a post by palingates. It was titled, Sarah Palin and Down Syndrome: Spot the Difference. Regina found a blog that a woman was running that was about her son, Max. It is a wonderful blog that is titled, Hang On Little Tomato. Her name is Catherine Just. I encourage everyone to read it. It radiates the love this woman has for her son and her family.

This is a natural progression of a real pregnancy. A woman's body has to have time to adapt to accommodate the size and weight of a baby. The uterus will increase to 20 times its original weight, and 1,000 times its initial capacity. In most women, there is pain and discomfort that occurs even with this slow progression. Part of this pain is caused by round ligament pain. This is the pain caused from the ligaments around the uterus. From the link it describes it like this:

* Your uterus is normally the size of a pear. Thick ligaments, one of which is called the round ligament, hold your uterus in suspension within your abdomen. As the uterus grows in size and weight, these ligaments become very long and thin, stressing and tensing like rubber bands.

* The ligaments pull and tug on nearby nerve fibers and sensitive structures, causing pain. The severity of pain can worry you. Although round ligament pain is uncomfortable, it is also very normal.

There are many aspects of pregnancy that can be uncomfortable. Nausea, vomiting, constipation, frequent urination and hemorrhoids are just a few that come to mind. Those are common with most pregnancies. But people can also have those symptoms without being pregnant. I want to focus on pain that is cause by the physical body changes that happen due to a pregnancy.

Round ligament pain is a direct result of the stretching of the ligaments caused by the expanding uterus. This expansion is from the growing of the fetus. It is bones and tissue along with the mass of the uterus that surrounds it. It is solid and unyielding. It has to grow at a relatively slow rate to keep the uterus from rupturing. If Sarah Palin had been pregnant the way she claims, she would have to have progressed from 0 (not pregnant) to a full eight month pregnancy in four weeks. Here is a link to the reference used Try to imagine it, EVERY WEEK having the uterus forced to stretch to a size that should normally take TWO MONTHS.

If this had actually happened the way she claimed, she would have been in the hospital screaming in pain. Doctors and scientists would have been studying her. Medical Journals would have reported it. The human body just does not work like that.

But now there is another problem. Supposedly the pregnancy progressed in an even shorter period than that! When we take 'The Nail In The Coffin' picture, that Audrey found when she blogged on 'Palin's Deceptions we find that she also showed no signs of pregnancy on March 26, 2008, when she was suppose to be 31 weeks pregnant. Just one week short of supposedly becoming 8 months pregnant. 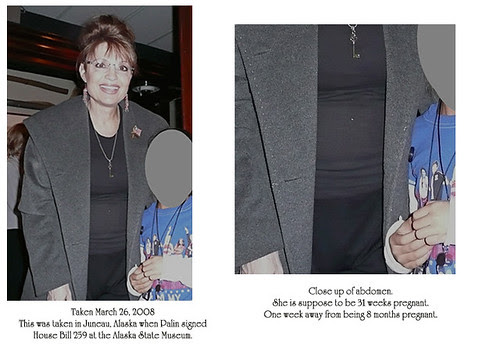 And the time period where she finally begins to 'show' is also shorter. It is not gradual in the least. Now she is suppose to be the size she might be if she was actually pregnant. We see on April 8, 2008, where she is pictured with Elan Frank. Mr. Frank was doing a documentary on exceptional women and chose to have Sarah Palin in it. There is also a picture of a screen grab that was taken at that time of her thumping on her stomach.

Those two pictures are 13 days apart. Just under two weeks. That would mean that her uterus would have to be forced to stretch by FOUR MONTHS, EVERY WEEK.

Sarah Palin would have been in the hospital if that had actually happened, but not from being in unbelievable excruciating pain, that is a given. She would be in surgery due to having her uterus rupture. She sure as hell wouldn't have been saying this:

If you still believe that Sarah Palin was pregnant with Trig, you might want to take a refresher course in biology.
Posted by Next Chapter at 3:30 PM